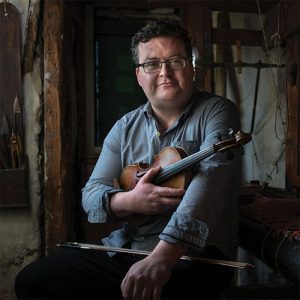 Born in Ayrshire in 1973, Alastair Savage has performed traditional and classical music throughout his life. He won the Land O’ Burns Scots Fiddle Competition in 1986, taking first prize in both the Ayrshire and National sections. He has been a member of the BBC Scottish Symphony Orchestra since 1997. As a traditional fiddle player he has released four solo albums, three predominantly of his own music followed by an album of melodies focusing on Niel Gow, Rabbie Burns and James Scott Skinner. Alastair has broadcast on BBC Radio and his music has been used in documentaries by BBC Alba.

“…a primer for anyone with a notional interest in Scottish traditional music.” Glasgow Herald

“There is a breathtaking effortlessness to Savage’s musical art: technical and intricate without ever overshadowing the music itself.” Bright Young Folk

“…a most finely crafted piece of work worthy of a master of the art.” FolkWords

Here are a couple of tracks from Alastair’s catalogue.