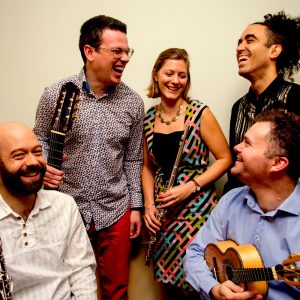 ALVORADA are the UK’s leading performers of choro, a style of instrumental music from Rio de Janeiro filled with rich melodies and infectious rhythms. From original compositions to classics, Alvorada’s music incorporates the irresistible swing of samba, the danceable grooves of forró, and even a touch of tango and funk. Since forming in 2016, the tight-knit quintet has taken London by storm. The tight-knit quintet has performed at festivals and venues across the UK and beyond, recently selling out Pizza Express Live album launch and Paris International Choro Festival.

“One of the most exciting new bands in London” Resonance FM