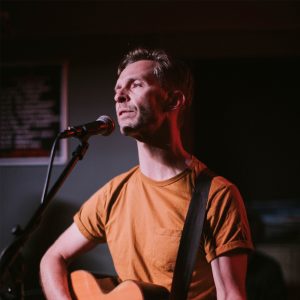 Shetland musician Barry Nisbet is a songwriter and sailor with a repertoire inspired by the drama of life, his islands, and the sea.
Playing contemporary folk that is firmly placed in the modern world, Barry’s roots are traditional, with a fiddle-playing background and a voice that has been compared to the late Iain Mackintosh.

He launched his first album, featuring original songs and a full band, in March 2018 to excellent reviews. He performs regularly in Scotland, England and mainland Europe.

As one of the Cullivoe Fiddlers, Barry plays a regional style of Shetland music; a Captain of tall ships such as Søren Larsen, he has sailed the Pacific and Atlantic Oceans. He now runs the ‘Sessions and Sail’ voyages, bringing musicians together for workshops and sessions aboard the ‘Lady of Avenel’.

He gained a Dundee Musicians Award in 2016.