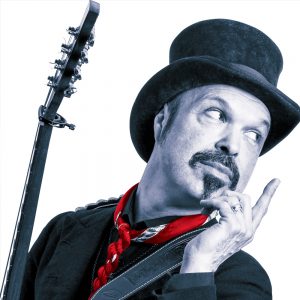 Captain of the Lost Waves

The Captain is not just the figurehead of his musical vessel: he’s ringmaster; bard; troubadour; master of ceremonies and sage. With one leg in early 20th Century vaudeville and the other in tomorrow’s social commentary (yes, he has very long legs!), there’s far more to him and his absurdly engaging world than any of your ten-a-penny musical stars. Seen through showers of glitter, kaleidoscopic lens flares and in the rainbows in a million puddles, the Captain of the Lost Waves tells stories to connect with everyone past, present and future.

Taking his inspiration from music hall, vaudeville & folk/cabaret, where anthems, anecdotes & absurdity reign, expect improvisation and intuitive performance. A Captain show has been described as ‘like trying to describe the colour number 9…impossible, it has to be experienced to be believed’…

‘This artist is a one off but maybe consider as a prototype his idiosyncrasy Zappa, Beefheart or The Sensational Alex Harvey Band. It’s a wonderful album which sublimely illuminates the human condition and at the same time treats us to a cornucopia of musical treaures.’ COLIN BAILEY, ROCK N REEL ( both Hidden Gems Chapter 1 & 2 were his albums of the year )

‘there really are no words in the English language to describe The Captain. Lyrically fascinating and melodically intriguing, a complete hidden treasure’ ‘his wonderfully eccentric show is not to be missed’ LOUDER THAN WAR

‘ The Captain puts on a show that rivals the star attraction in the theatre, one that is emblazed in lights and the dramatic, yet never once strays into the artificial or dismally unbalanced realm of the pretentious’ LIVERPOOL SOUND AND VISION

‘It’s musical peyote, or whatever Lewis Caroll was on. Hallucinatory audio theatre, choruses of drunken sailors, East German mandolin worriers and Bavarian Bouzouki fondlers. This album is so special, containing melodies that will get under your skin and haunt you like a weathered tattoo of your favourite dead sheepdogs name.’ GIGWISE

‘The man we see in front of us clearly exudes talent from every pore, let’s be clear about one thing first; the Captain can really sing, I don’t just mean he can sing in Fringe terms, I mean he has a voice you might hear on a West End Stage or here in Edinburgh at a recital in the Usher hall. ‘ RICHARD STAMP, FRINGE GURU, EDINBURGH FRINGE FESTIVAL