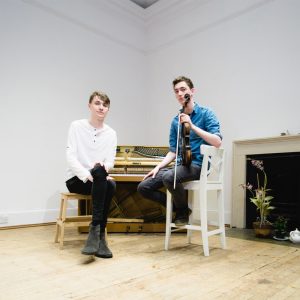 Charlie Grey and Joseph Peach make music on the piano and fiddle. They are Scottish folk musicians, interested in making music filled with spontaneity, sensitivity and freedom.

Inspiration comes from their pasts and surroundings, feeding music that’s rooted in tradition, whilst stretching it’s possibilities through improvisation and imagination.

In 2017, the duo reached the finals of the BBC Radio 2 Young Folk Award, and FATEA Magazine’s Instrumental Album of the Year Award.

2019 saw the release of Air Iomall (Scottish gaelic for “On the Edge”)- a film and suite of new music, inspired by a voyage aboard the tall ship Wylde Swan to some now uninhabited islands deep in the North Atlantic, some of Scotland’s most remote, and remarkable places. The album has been longlisted for Album of the Year at the 2019 Scots Trad Music Awards.

“As both composers and players, the duo display enthralling prowess and attunement” ★★★★★ – The Scotsman (Gig Review Sept 2019)