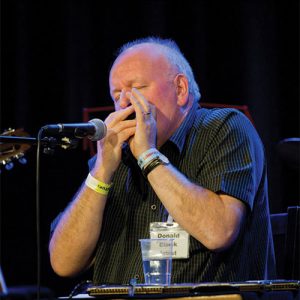 Highly respected ace Scottish Celtic Harmonica player Donald Black is firmly established as “the instrument‘s foremost exponent in Scottish Traditional Music” (Scotland on Sunday). With his own unique style and mastery he has almost single-handedly given the harmonica a new respect and acceptance as a significant part of the Scottish Traditional Music scene. Drawing his repertoire mainly from pipe and Gaelic material of the Scottish Highlands and Islands, Donald also incorporates influences from mainstream Scotland, Ireland, the Shetland Isles, Cape Breton (Nova Scotia) and beyond – all combining incredible virtuosity and great feeling with quality entertainment and audience connection.

“To put it mildly he is a virtuoso.” FOLKING.COM

“…(the album) is varied, beautiful, exciting and a whole load of fun.” FOLKING.com

Here are a couple of tracks from Donald’s extensive catalogue.