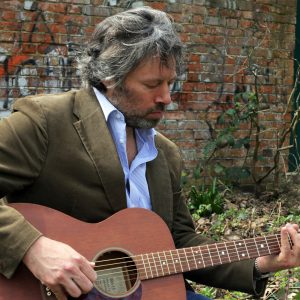 Jake Aaron is a British guitarist, singer-songwriter whose first EP was released in 2016 to positive reviews from Folk and Indie reviewers. In 2018 he released “Give Me Your Horse” – an Americana, Jazzy instrumental which received airplay on both Folk and Jazz radio stations including BBC Jazz Nights. His first album “Fag Ash and Beer” was released in September 2019.

“Simply calling Aaron a guitarist and songwriter is a little like calling Warhol a painter … it misses the mark by miles.”
Tim Carroll – FolkWords

“The next one, “Give Me Your Horse”, is a treat. I think there’s a Movie Soundtrack in this one actually ”
Linley Hamilton, BBC

“One of the most surprisingly good albums I’ve heard in a very long time.”
Rick Stuart, Roots and Fusion

” Elvis Has Left the Building … would fit perfectly over the opening credits of some sprawling American road movie.”
Paul Jackson, FATEA MAGAZINE