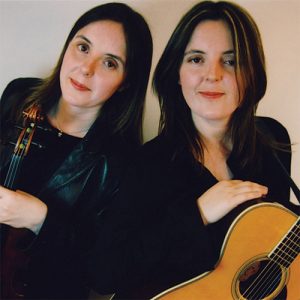 For over three decades this talented twosome have been household names in the global traditional music scene. The unique tuned tones of twin sisters Jennifer (fiddle) and Hazel (guitar and piano) is augmented with soft spoken stories and imbued with a see-saw mischievous Scottish dialect. Rooted in the ancient isles of Orkney off the far north of Britain their music has been described as a dancing dialect of “songs without words” and has been wooing and enchanting audiences from Bergen to Brisbane to critical acclaim. The Wrigley Sisters are unquestionably regarded as at the forefront of Orkney’s incredible yet quietly confident rise to fame.

“The best folk music is born of tradition but enlivened and invigorated by new ideas. Jennifer and Hazel fit that bill perfectly.” South China Morning Post

“People aren’t just going to get a string of tunes, but an Orkney experience.” The Georgia Straight