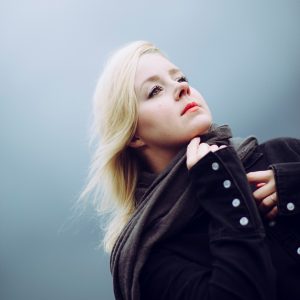 Ullapool based Kim Richards is a multi-instrumentalist, singer, songwriter, artist and teacher whose debut album ‘Leaves that Fly’ received fantastic reviews. Inspired by folk tales, nature, journeys and her love of Scottish traditional and folk music, Kim Richards’ talent as a storyteller, accomplished musicianship and “crystal clear voice” shines through in her work.

“A very good album that emphasises how much talent this woman has.”
Maverick Magazine ★★★★

“An album of comprehension, an album of awareness in the natural, Leaves That Fly is a superbly arranged debut recording that will undoubtedly permit the listener to dream of higher branches of beauty.”
Liverpool Sound and Vision Magazine ★★★★

“If Kim Richards had recorded these songs accompanying herself on the piano, then the quality of her voice, writing and playing would have made this a fine listen. As it is the players she has assembled and the rich arrangements, layering ancient, modern, acoustic and electronic, swaddle the listener and make it a powerful experience.”
Northern Sky Magazine ★★★★

“The strength of Richards’ voice and her talent as a storyteller shines through… With a fine, striking yet soft voice and a talent for song writing, Richards is certainly one to watch.”
Songlines Magazine

“Kim’s voice is rich and varied… Many tracks are worthy of mention, especially Kim’s compositions with their rich arrangements and soundscapes.”
Shire Folk Magazine

“Not sure I’ll hear a better debut CD this year than Leaves That Fly.”
Roger Williams, Blues and Roots Radio

“Her considerable artistic talents can be seen. Kim’s blessed with a similarly attractive timbre and accent as Karine Polwart, a lilting delivery that displays a persuasive combination of gentleness and strength.”
Stirrings Magazine

“Kim Richards will entrance you with her crystal clear voice.”
Irish Music Magazine