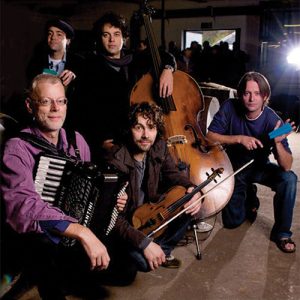 Thrillingly original cutting-edge klezmer and folk music from some of Scotland’s finest musicians. An intoxicating, life-affirming mix of Eastern European dance music, Middle Eastern rhythms and virtuoso performances. Formed in Edinburgh in 2003, Moishe’s Bagel combines the energy and passion of world folk music with the excitement and soul of improvisation. Boasting some of the best instrumentalists that Scotland has to offer (Salsa Celtica, Camille O’Sullivan, BBC Scottish Symphony Orchestra, Eliza Carthy, Scottish National Jazz Orchestra), they are equally at home jamming in a late night jazz den, grooving at a forest festival, or enthralling an upmarket concert hall.

“This brilliantly accomplished and adventurous five-piece emphatically puts the ‘class’ into ‘unclassifiable’.” The Scotsman