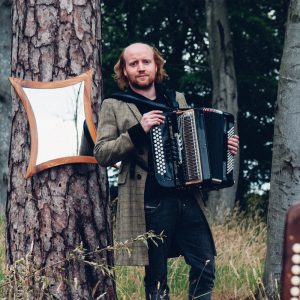 Norman Mackay is an Edinburgh based musician and composer.

His compositions have featured on TV documentary soundtrack, BBC television & radio. Past commissions include a film score (‘CHAIN’ by the late crime writer James Crosbie) which was screened at the Cannes Film Festival.
He’s also recently worked on various collaborations with the Berlin based contemporary artist, composer & musician Jamie Ross.

“Brash and eclectic, Norman’s playing combines the drive of Scottish accordion music with the flow and variations of the continental style.” The Living Tradition

“This formidable button accordionist from Nairnshire has energy, talent and musical depth to spare.” Musician’s Union

“The accordion is the hands of a master like Norman Mackay is such an evocative instrument, drifting between noir film soundtracks, eastern European cafe music and visceral Folk” Northern Sky Magazine