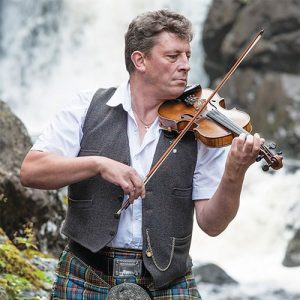 As one of the most respected exponents of the Scots fiddle tradition, Paul Anderson is in high demand to perform at concerts, festivals and clubs. He also regularly appears on TV and radio. Paul has composed around 450 tunes in the traditional Scottish style, many of which appear in his Lochnagar Collection. He has written for TV, film and stage, and his music has been performed at the BBC Scottish Proms. Paul is an experienced fiddle tutor and a popular workshop leader and lecturer having led workshops at St Andrew‘s University, Aberdeen University, the traditional music course at Benbecula college, all five North Atlantic Fiddle Conventions and in Canada.

“This music lives and breathes and takes you, through its vibrant illustrations and artworks, into a world that Anderson clearly loves.” FolkWords

“…music stirs the imagination and words flow invisibly …down through each instrument and every bar.” Liverpool Sound and Vision

“…a truly masterful exhibition of fiddle composition and playing.” Scotland on Sunday