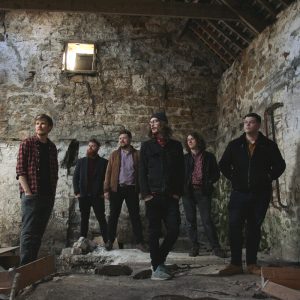 After crossing paths in the northern city of Newcastle, six young musicians immediately began to share tunes, eventually forming the powerhouse of progressive instrumental folk that is Pons Aelius. Motivated by a collective enthusiasm to share their distinctive style of music, the band have extensively toured the UK and Europe, bringing their much loved live energy to stages such as Celtic Connections, Towersey and Priddy to name a few. During this time, they have recorded an EP and a studio album, which was released to critical acclaim in 2017 and featured on radio shows worldwide.

Fire Under the Bridge, the band’s second full length offering, represents a culmination of five years of road-earned experience. They have finally captured the essence of their live sound. Get a copy, hit play, and take the first step down the road to enlightenment.

“A colossal sound-world, drawing influences from far and wide, yet managing to unite them under one roof.” – Alex Gallagher, Folk Radio UK

“…a band that is taking tradition to places it never thought to go, and in the process making invention and innovation bywords for their music. … which results in an album that’s intricate, expansive and wholly engaging.” – Tim Carroll, FolkWords