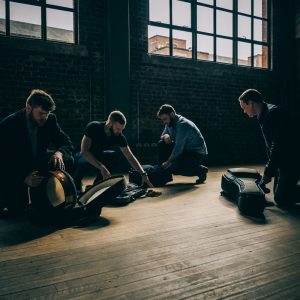 “One of the most exciting bands on the Scottish folk scene” (Songlines) RURA are one of Scotland’s most powerful contemporary folk-based bands. Their exquisitely rugged yet refined blend of fiddle, Highland pipes, flute, bodhran and guitar has won a devoted following in many corners of the globe, amongst audiences and critics alike.

The group’s journey began in 2010 and since then, Jack Smedley, Steven Blake, David Foley and Adam Brown’s powerful, entrancing instrumentals have been a main stage highlight of many of the world’s leading folk festivals – including Cambridge, Tønder, Winnipeg, Vancouver and HebCelt, amongst countless others across 20+ countries. The band have released 3 heralded albums and are set to celebrate their 10th anniversary in 2020 with numerous UK and international dates.

In Praise of Home Review (Songlines) 2018:
‘A stunner it is too… An accomplished, mature and beautiful album, it’s a joy from start to finish.’

In Praise of Home Review (The Skinny) 2018:
‘The perfect soundtrack to the Scottish summer.’