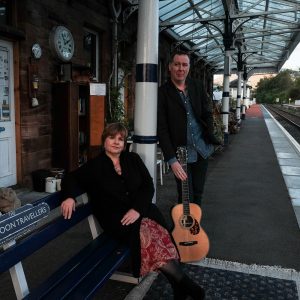 The Blue Moon Travellers, are a duo comprising Edinburgh and Oban based Singer/Songwriter duo, Jim Bowers and Sheila McWhirter. Experienced and seasoned performers, having performed in a variety of line-ups and genres over the years, they have been described as having “spine tingling vocals, outstanding guitar arrangements and mellow sounds”. Warm, emotional and honest vocals and sensitive guitar accompaniment, coupled with first class song-writing, make for an entrancing combination. Sheila and Jim are top class musicians who bring a great combination of humanity, humour and emotional engagement to provide, quite simply, quality, acoustic music. Into the Blue is their first album and consists of a lyrical musical journey with themes of love, loss, longing and travelling – or “Life in Eleven songs” . These original compositions draw from Folk, Jazz, and Contemporary New Acoustic musical styles

We were lucky enough to get hold of a copy of their debut album “Into the blue” and what a beautiful piece of work it is. Essentially an acoustic duo they expand on their instrumentation introducing bass, drums, cello and harmonica into their recordings. With elements of folk, soul, funk and rock the songs really do shift in pace throughout the album and instantly you are drawn to the amazing vocals and guitar playing. This album has been a long time coming and is a great accomplishment for the duo. If laid back acoustic songs are your thing then you should definitely check out The Blue Moon Travellers.
Argyll Music Scene

We saw Sheila as part of a superb acoustic duo “Blue Moon Travellers” playing at an Americana/Folk Festival in Aberfeldy. To us they were definitely the stand-out act. We were mightily impressed by the songs and spine tingling vocals! Sheila and Jim certainly are top class musicians and know how to deliver a song with musical sensitivity and emotion.
Andy & Natasha Spiller – Hypercoaster Music

Christine Kydd (Professional Musician and Ethnographer)
“One of Scotland’s best kept secrets, Sheila brings that great combination of humanity and humour with a voice of delicious warmth and depth. “

Duncan Keary (Sound Engineer)
I have had the pleasure to work with Sheila both in a studio and live setting and I cannot speak highly enough of her soulful voice.Sheila is very knowledgeable about her music and communicates what she requires very well. This makes her very easy to work with and her guitarist Jim Bowers is the same. Very professional as soon as those mics go live, both in the studio and during soundchecks and they are very audience focussed during their performances.