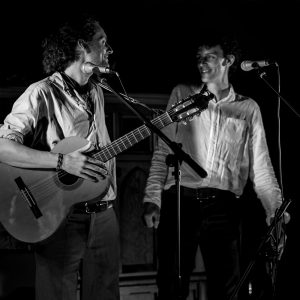 Brothers James and Sam Gillespie grew up in the Northumbrian village of Wall and sing finely crafted original and traditional songs. Rich with lyrical intensity and the sounds of soaring sibling harmony, guitars, flute, fiddle and mandolin, their second album ‘The Fell’ has been described as ‘a classic in the making’ (Northern Sky) and as showing ‘British acoustic music in its best possible light’ (Folk Radio UK).

As well as the folk traditions of Britain and Ireland they are deeply inspired by the folk revival artists of the 60’s and 70’s and the American roots folk and blues traditions.

The brothers have travelled widely since 2015, singing everywhere from campfires to concert halls, Parisian circuses and folk festivals. Their performances are often intimate and personal, animated by a rare energy that is both earthy and ethereal, romantic and radical.

“This is a moving and surprising album. Stunning songs beautifully sung and played. Without doubt a classic in the making from a duo potent with potential.” Northern Sky, 5 star review of The Fell

“Imagine the guitar work of the early Nic Jones, the close harmony work of the Dransfields and the commitment and honesty of Bob Davenport rolled into two brothers and you’ll get some idea. Their new album The Fell is totally brilliant” Mike Harding

“Every song on this album brings a separate and pertinent story which burns brighter with every listen. A definite musos album, ‘The Fell’ could be lost treasure from the British Folk Revival or a modern day contemporary Folk classic. An album of visceral beauty, striking for the heart and as part of the earth, land and landscape as the title suggests. Highly recommended”Fatea Magazine

“The Fell taps into themes and tunes that I feel I have known all my life (but haven’t because they’ve only just been written) and, like all updates to the tradition, are simultaneously part of the music of past centuries and also entirely new and relevant” Folking.com

“Warning to all folk fest and club orgs. book these lads while you still can because I have a feeling that they aren’t going to be short of work. At the moment the buzz is mainly around the North and the borders. But – watch this space” Mike Harding